The Capture of Pensacola 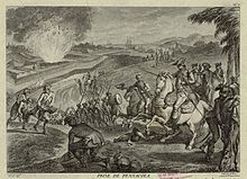 One morning  November 7th, 1814, Andrew Jackson's forces approached the small town of Pensacola. The attack was a small scale clearing of Spanish soldiers and Jackson's army was smaller in comparison to the troops he would end up leading  in New Orleans. In Pensacola the Spanish resitance was very weak and the British did not want to get involved, leaving the  Spanish alone. With one push Jackson and his men stopped the British threat of entering Florida and pushed away the straggling British . Simultaneously, Jackson made it impossible for future Spanish and British cooperation without the help of the United States Government. This small battle was a larger leap towards the final destination of the War of 1812... The Battle of New Orleans.