The Invasion of florida 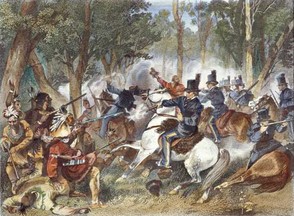 The seminoles in Spanish Florida and Americans in Georgia staged raids against each other Spain was unable to control the border, and many Americans clamored for the United States government to step in an protect them. In 1818 secretary of wa, John C. Calhoun, ordered commander Andrew Jackson into Florida to stop the Seminoole raids. After destroying several villages, Jackson disobeyed his orders and seized Spanish settlements then removed the Spanish govenor from power. The battles ended in negotiations of the Adams-Onis Treaty giving America power over Florida and finalizing the American western border.