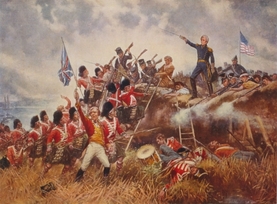 In the fall of 1813 General Andrew Jackson raised a Tennessee militia force of MORE than 2,000 men and backed it up with ANOTHER 1,000 Lower Creek and Cherokee warriors(a big militia at the time). Jackson led his men into several unimportant battles but the poorly trained and lazy soldiers had trouble during combat. Jackson executed several soldiers who had panicked under pressure, this led to Jackson gaining immediate attention of his troops. The final battle of this war was fought on March 27, 1814. His men nearly wiped out the enemy force and later Jackson wrote the lives lost  were "dreadfu." Thankfully the Upper Creek lost more than 550 soldiers while Jackson's victorious troops only lost 49 members.