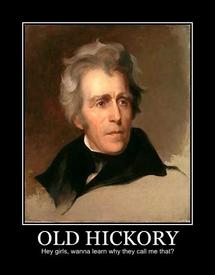 In December 1812, President Madison ordered Jackson to lead 1,500 troops into Natchez and eventually to defend New Orleans. During the march the war department BELIEVED the threat in New Orleans had passed and Jackson was ordered to immediately return to Tennesee.  After a pointless and  long march Jackson was outraged at the decision and he then decided to lead his force through hostile Indian lands. Sharing in all the hardships, Jackson successfully led his poorly trained army back to Tennessee encouraging them as they went along. Once they arrived back at home, his troops compared his toughnes to that of  Hickory Tree and nicknamed him "Old Hickory."