The Battle At hanging rock 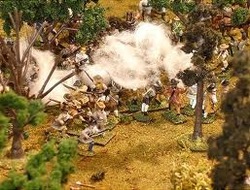 At the age of only 13 the young Andrew Jackson was sent to fight in the battle of hanging rock.  In this time Jackson was captured by British forces and asked by several British officers to shine their boots. Even at this weak and peaceful age Andrew Jackson knew what he had to do and he refused to take part in  such a demeaning deed. After his refusal an officer went and  to struck him with the flat side of a saber. It was this simple event that would bring out the worst in Andrew Jackson and one simple strike to the face would provoke an everlasting hatred towards the British but a brilliant leader.